Let’s be honest: hardcore fans of intellectual properties can sometimes create a harsh environment that alienates and even becomes toxic to others. When thinking of this topic, the first thing that likely pops into the minds of the online film community are the fans of DC Comics movies. Sure, every tree has a bad apple or two, but I am under the impression (since I am among the many in the fandom) that DC Comics fans are given a bad rap. DC fans are truly some of the best on the planet and I have been lucky enough to have known them for as long as I can remember (as well as some Zack Snyder fans, but that’s a different topic for a different day).

Let’s look at the DCEU. The common perception is that this shared universe of films hasn’t gone over well with wider audiences and critics across the world, but the hardcore fans have gone to the theaters to support the DCEU multiple times per film. This was primarily the case with Batman v Superman: Dawn of Justice as Warner Brothers even released a statement to confirm it, stating that a $50 million weekend for any movie is a success. Despite the nosedive in weekly box office, it was noted that the fans of the movie and cinematic universe kept returning to theaters and helped that film gross over $870 million worldwide.

In terms of Justice League, this was a situation in which Warner Brothers “turned their cheek” to the fans of the “struggling” DCEU up to that point and decided to have their reshoots make the film a more watered-down, simplistic story with more color and humor so it could be more appealing to the masses, but this idea backfired because the hardcore fans of the films up to that point felt betrayed and, to this moment, don’t appear to be heading back for multiple viewings. It has led to the backfire of not really garnering the box office return it was expected to make – in fact, Justice League had the lowest opening weekend box office of any DCEU film to date with an estimated $94 million and it should have been the highest, which belongs to Batman v Superman at $166 million. The worldwide box office total for Justice League sits at an estimated $600 million at the end of its theatrical run, which is still the lowest total for a DCEU film. It also doesn’t help that ever since the release of Justice League, there has been a strong calling for a Zack Snyder Director’s Cut of the film (the petition currently sits at over 165,000 signatures as of the time this was written with a potential website on the way) and leaked details of deleted scenes and characters from the film by filmmakers on the project have only made matters worse for WB. Mistreating fans for the hopes of wider audience appeal (and to ensure the security of bonuses before the AT&T merger kicks in) seems unfair and unjust to me – especially since those hardcore fans supported the film even in the midst of all the chaos – but I guess that is the world we now live in.

Speaking of loyal DC fans, this is not the first scenario in which a fan of the DCEU has been treated unfairly. As some of you may already know, Jesabel, a popular DC fan on Twitter and Vero, was the victim of a film critic’s blind assumption of DC fans. For those that do not already know, Vero is a newer social media app that is user friendly by way of a great design and layout as well as refusing to allow ads and algorithms (Click here to know more about Vero ). When Zack Snyder posted his short film, Snow Steam Iron, onto Vero on September 19, 2017, a film insider and critic on Twitter named Jeff Sneider used it as an opportunity to belligerently announce (for reasons that still escape me) that he would not download the app to watch the short film. The screenshots of the Twitter conversation are featured below.

As you can see, Sneider immediately retaliates by bringing race and beliefs into the equation – something Jesabel reiterates and denies doing in the subsequent tweet. It does not take a rocket scientist to recognize that Jesabel never made any comment in regards to his beliefs, but rather the unnecessary comment made from Sneider about Zack Snyder and Vero. Sneider also threatened to block and report any Twitter user that liked/favorited her tweets to him. Apparently that is the level of hate and disrespect DC fans are supposed to deserve.

Sneider even boasted and exuberated his arrogance about the strange, ridiculous, and unacceptable success in getting Jesabel’s account temporarily suspended (although Twitter soon after faced harsh criticism for another controversial topic, which led to a day dedicated for boycotting Twitter). It got to the point in which Sneider claimed he was going to get the FBI involved – which became a laughing stock for the incredibly large masses of DC fans defending and supporting Jesabel. Let’s just say I’m glad I didn’t draft him for my Schmoedown Fantasy Team.

Fans have been loyal and supportive of the DCEU ever since Man of Steel, but the online film community faced a tense and ultimately divisive situation after the theatrical release (and ultimate edition) of Batman v Superman. For those not familiar, the film was highly anticipated due to its first-class marketing and high-profile talent involved. People had also been waiting for decades to see Batman and Superman share the same screen together and this was going to be a dream-come-true for many. Once the film opened in theaters, however, it became a “love it or hate it” kind of film in which more people probably did not like it than those that liked it. Some people were calling for Zack Snyder’s head and advocated for him to be fired from helming Justice League, which was scheduled to shoot only a few weeks after BvS‘s debut. That clearly did not happen (at least not right away) and more people would later apologize to him after the ultimate edition was released on blu-ray and digital, but audiences still weren’t completely on board with this new entry into the DCEU and it has led to a raging debate online ever since.

One of those outcomes would be the narrative, led by YouTuber Grace Randolph, that DC fans accused film critics and Rotten Tomatoes of purposely giving BvS bad reviews because it did not have the comedy and lighter tone that Marvel typically has with Disney. I feel I would be doing a disservice to write an article defending DC fans without mentioning potential counterarguments. This accusation began a larger debate about the power and necessity of Rotten Tomatoes in the film world – which is a great conversation to have – but I must admit the accusation itself is slightly misguided. While most of the people staunchly supporting the accusation are what former AMC Editor-in-Chief and Collider Senior Producer, John Campea, calls “corporate zombie fanboys” and while I, myself, do not believe in the accusation, I agree with an opinion made by YouTuber and DC fan, JaeRoar. In a video about the topic at hand, he said he did not believe Marvel was paying off critics, but added “I do believe people are playing favoritism” and were not open to liking the movie going in to watch it. For whatever it is worth, I am a fan of the film because it is a unique way of telling a superhero epic with legendary characters, but I can acknowledge, appreciate, and respect those that think otherwise.

One fan that would have probably supported and praised the film would have been Bazz, but, unfortunately, he didn’t make it to March 2016. He had terminal cancer and really wanted to see BvS before passing away. Fans of the DCEU quickly sprang into action to spread awareness of his situation in the hopes that WB would hear about it and let him see the movie before it was too late. Although he was initially believed to have passed away before seeing it, it was revealed later on that Bazz did indeed see the film privately. This heartwarming instance shows just how dedicated DCEU fans are to one another and reveals how caring and supportive they are towards each other.

Speaking of DC fans supporting each other, I recently came across a tweet the other day in which a DC fan named Chandler (@CinematicEX) acknowledged and shared a thank you tweet to a plethora of DC fans on Twitter. 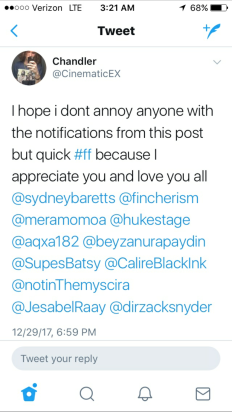 It started a great thread of positivity within the fandom that was yet again another prime example of how DC fans are not the raging lunatics some people blindly believe. It is not that hard to believe that this kind of camaraderie exists in DC fandom. Maybe people are just looking in the wrong places and using that as their basis for judging fans of DC.

Fans of DC Comics characters are not crazy and have not lost their minds. We, the fans, are not toxic to the rest of the online film community as a whole. There are many great fans of this intellectual property out there, whether it be on Twitter, Vero, Facebook, or Instagram. They are passionate about their love for these characters, the worlds they live in, and the filmmakers creating those worlds for the big-screen. Heck, some fans are using their passion to fuel their creativity by making videos of the DCEU, such as edits to Justice League that take out the Danny Elfman score and add in the previous Hans Zimmer scores. The point is: before jumping to conclusions and judging an entire fandom based on ridiculous YouTube complaints from those “bad apples,” know that real, educated, and passionate fans exist from all around the world. Who knows, maybe if you take a few seconds to understand someone’s differing opinion and not try to bite their head off, maybe some of the world’s divisiveness will dissolve and fade away.